BOSS 302 in Calypso with Power Steering 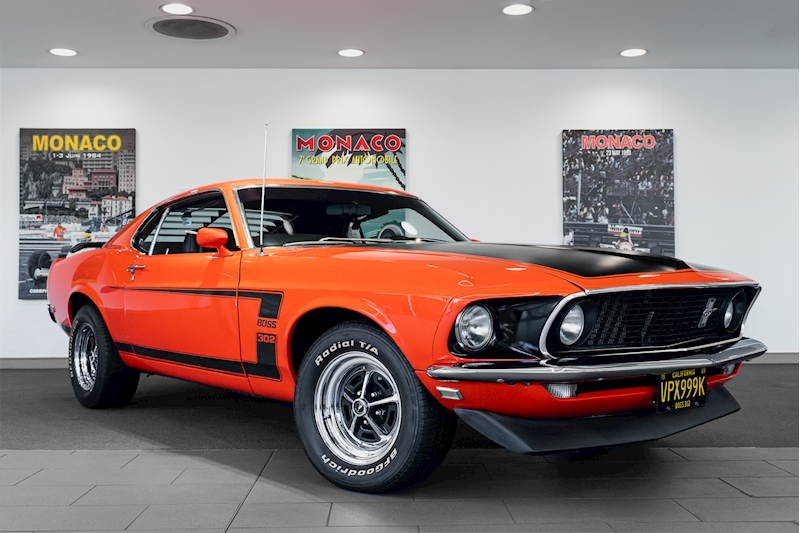 The Boss 302 Story: By the late 1960s, Ford had seemingly abandoned ambition toward road track dominance, or so many thought. Consumers often voiced discontent toward the manufacturer’s growing efforts toward appeasing those who desired outright straight-line performance. However, most of such critics were oblivious to the fact that Ford was already in the midst of creating their next street-dominating Mustang.

At the time, Ford was quickly falling behind Chevrolet in the power wars, as the Camaro’s star was rapidly rising. In fact, the then-newly released Z/28 Camaro was making waves across the automotive landscape. Ford knew that they had to counter immediately. To facilitate such efforts, engineer "Bunkie" Knudson and designer Larry Shinoda were brought on board. Both had previously been employed by General Motors.

With the right team assembled, the development of the newest road-track-derived Mustang got underway. The goal was simple; build a Mustang which could dominate the Trans-Am racing circuit in its respective class and toppling the Z/28 Camaro in the process. From these efforts, the 1969 Mustang Boss 302 was born.

Heading up design efforts related to the Boss 302 was Larry Shinoda. By this time, Shinoda had already built a name for himself as a world-class designer, having worked on such iconic projects as the Mako Shark concepts for GM. Shinoda looked to build upon this legacy by providing the Boss 302 with a stylish, yet aggressive appearance. By all accounts, he did so to a tremendous degree of success.

The 1969 Boss 302 was available only in a Sports-roof Fastback body style and featured numerous distinguishing exterior characteristics. The Boss 302’s hood featured a matte black centre plane, which was said to reduce glare. The car’s front headlight buckets also took on a similar matte black appearance.

Underneath the Boss 302’s front end resided an integrated chin spoiler, which was designed to reduce aerodynamic drag. The Mustang’s front fender wells were also enlarged to accommodate the Boss’ larger front tires.

Perhaps most readily identifiable was the Boss 302’s black rocker panel striping, which canted forward in the margin directly behind the front fenders, before turning back toward the vehicle’s rear renders. This striping also featured the "Boss 302" logo just to the rear of each front fender.
Much like its hood, the Boss 302’s deck lid was also blacked out, as was its rear facade, which featured sequential turn signals. A set of matte black rear window slats and a rear spoiler of the same colour rounded out the car’s striking appearance. The 1969 Boss 302 Mustang could be ordered in Bright Yellow, Calypso Coral, Wimbledon White, or Acapulco Blue.

The Boss 302’s interior often varied significantly from one car to the next. The 302 came standard with Ford’s base model Mustang interior, including bucket seats. However, multiple options were available to consumers, and many motorists chose to upgrade to the use of high-back bucket seats or differing dash gauge configurations.

Base interiors featured the Mustang’s standard gauge arrangement, which included alternator, fuel, temperature, and oil pressure gauges. Alternatively, when the option of a tachometer was selected, the Boss 302’s alternator and oil pressure gauges were replaced with warning lights.
Since the Boss 302 was intended for homologation into SCCA production-class racing, Ford knew that they needed an engine capable of pumping out Camaro killing performance. To achieve this, Ford utilized a 302 cubic-inch Windsor engine block, fitted.

Privacy Overview
This website uses cookies to improve your experience. Accept to allow all cookies, or you can find out more information here:
Essential Always Enabled
Essential cookies are necessary for the website to function properly. This category only includes cookies that ensures basic functionalities and security features of the website. These cookies do not store any personal information.
Non-Essential
Any cookies that may not be particularly necessary for the website to function and are used specifically to collect user personal data via analytics, ads or other embedded contents are termed as non-essential cookies. It is mandatory to procure user consent prior to running these cookies.
Accept all cookies
Settings
Deny all cookies
Top
HIDE
The Scuderia Prestige Track Academey is back! With Fresh Dates for 2022!